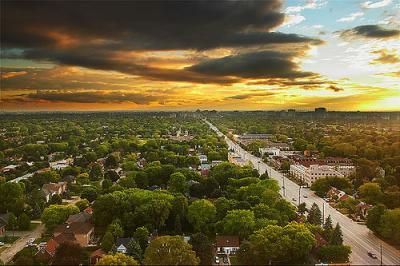 Johannesburg’s trees, a vast urban forest, map the segregated history of the city. Yet they are also essential to the wellbeing of the city and should be an area of investment.

In the late 1800s, the settlement that was to become SA’s largest city had almost no natural shelter from sun and dust. Once gold mining was well under way, the city grew rapidly, and with that came trees.

Street trees were planted from 1904 as white residents established suburbs, and today those giants still line roads. But areas for black residents built in the following decades were not regarded as permanent, and there was scant investment in green infrastructure.

The consequence of that is still evident today. Although some fruit trees were planted on small residential stands in Soweto, and despite the City of Johannesburg’s Soweto Greening project started in 2006, a satellite image still shows the stark difference between the leafy suburbs and, for example, Alexandra and Soweto.

Green infrastructure is an investment in a city. “Rethinking the Future of Cities, How trees are revolutionising cities around the word”, published by the Food and Agriculture Organisation (FAO), says trees can reduce temperatures by up to 8°C and cut the need for air conditioning by 30%. And reduce heating bills by up to 50%.

Other FAO reports say a mature tree can absorb 150kg of carbon dioxide a year and filter fine dust and smoke particles from the air by trapping them on leaves. And, of course, trees release oxygen.

Trees can be a food source. In Abu Dhabi, millions of palm trees were grown to line avenues for pedestrians to pick dates. And in Dhaka, in Bangladesh, trees help to slow run-off and so boost groundwater levels.

Trees attract wildlife, such as owls, which prey on rats, a health risk in all cities. They reduce noise, and fallen leaves replenish soil and preserve moisture.

Roots can damage city infrastructure and some consume a lot of water. But the benefits of trees outweigh the negatives, meaning existing trees need to be protected as Johannesburg embarks on a much-needed densification drive.

And areas that are not well wooded need investment — not only for the economic gains but for the mental health benefits greenery offers.

The Johannesburg Urban Forest Alliance, the Johannesburg Heritage Foundation and others are working to protect street trees as large apartment and office blocks sprout and, with that, the widening of roads.

According to Treepedia, Johannesburg ranks sixth in the world in terms of tree coverage. Others say it has 10-million trees.

Trees are Johannesburg’s natural wonder, offering displays of bright green spring growth, purple in October, a dense canopy in midsummer and the reds and oranges of autumn.

And there is nothing quite like the sight of a giant tree’s bare branches stretching up into the city’s big blue winter sky.

The Montague Gardens – Marconi Beam Improvement District (MMID) shares the view that trees are “essential to the wellbeing of the city and should be an area of investment.”

The MMID will start planting trees in the industrial and commercial areas that make up Montague Gardens and Marconi Beam in 2019. It will form part of the urban management and environment programme.

Property owners and businesses in the area will also be encouraged to plant trees.